The Force Unleashed Wiki
Register
Don't have an account?
Sign In
Advertisement
in: Characters, Light Side Characters, Jedi, Females

Shaak Ti was a female Togruta Jedi Master and one of the last remaining members of the Jedi Council, serving before, during and after the Clone Wars. She is voiced by Susan Eisenberg in the video game.

Shaak Ti served as a Jedi General during the Clone Wars. She fought in many battles, even a fight against the deadly General Grievous. Later when Darth Vader attacked the Jedi Temple, she managed to escape and fled from planet to planet until she finally landed on Felucia.

The Jedi Master struggled to survive Felucia's harsh environment and eventually made contact with the native population living amid the dense fungi jungles. She established a rapport with the Force-sensitive Felucians and began training their shamans in specific powers to help them oppose Imperial troops and minions of Vader who were hunting down the Jedi and seeking to eradicate the native Force users on the planet. While wandering the galaxy in search of other Jedi, Shaak Ti discovered the scared and confused Zabrak Padawan, Maris Brood. Master Ti was initially reluctant to take Maris as her apprentice; she had already trained two padawans in her career, only to see both of them killed by criminals shortly after their graduation to knighthood. However, Shaak Ti sensed that Maris was tormented by her hatred for Vader and spirited her away to the lush fungus planet Felucia. Shaak Ti later became a respected Felucian Chieftain, commanding tribes of Force sensitive natives, teaching them to control their abilities, hoping they could defend Maris, should Darth Vader find her, and thus also prevent the barbaric warriors from slipping to the influence of the Dark Side.

Vader instructed Starkiller to prove himself by killing Shaak Ti. Starkiller was sent to Felucia, in order to find her. This was Starkiller's final test, before he and Darth Vader, would attempt to overthrow Palpatine. By fighting Shaak Ti, Starkiller would face his greatest challenge. The Rogue Shadow was spotted as it reached Felucia's surface, and Shaak Ti mobilized the Felucian forces and sent Maris Brood to hide at the Rancor Graveyard. After killing his way through Felucians and rancors, Starkiller finally encountered the Jedi Master at the Ancient Abyss; a place of sacrifice for the Felucians, in reality the only known Mega Sarlacc pit.

Starkiller eventually found Shaak Ti, who was meditating and waiting patiently. She welcomed Vader's assassin and informed him of the Ancient Abyss and its nature. As she said this, the two Force users entered into a deadly duel.

The battle began with Starkiller trying to throw objects at the Jedi Master, but Shaak Ti easily blocked his attack, and lunged at the young Sith apprentice. She summoned numerous Felucian warriors to attack Starkiller, whom he was able to defeat. Starkiller and Shaak Ti were both surprised and impressed by the other's powers and skills. The fight progressed around the sarlacc's center rings, where blow met counter blow. Starkiller barely blocked Shaak Ti's rapid strikes.

Their duel moved onto the moving tentacles of the sarlacc. Shaak Ti launched a final attack consisted of three blows, that partially found their mark. The third blow would have skewered his right eye had he not held Shaak Ti back at the last minute with a desperate telekinetic block that stopped her lightsaber. However, the Jedi Master's final attack failed and Starkiller sent her flying back into the sarlacc's tendrils. Once there, Starkiller used Force lightning to attack both the creature and Shaak Ti together. Shaak Ti fell to the ground, mortally wounded.

Dying, Shaak Ti told Starkiller that he was a slave to Vader, and that his power was wasted on him. Starkiller refused to believe her words and said that she would never turn him against his master. A pitiful look fell upon Shaak Ti, and, dying, she uttered a fateful prophecy, and told the young man that the Sith always betrayed one another, and that only Starkiller could choose his path. She then purposely fell into the pit and conceded her defeat. Just as she began her plummet, Starkiller, for reasons unknown even to himself, extended his arm to catch her. Starkiller hastily reached for her, but she was already gone. At the second of her death, some form of blue light and sound similar to that of Palpatine's first death occurred. With her death, the world of Felucia fell into darkness. 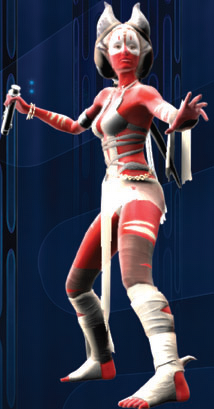 Shaak Ti is the beautiful Jedi Mistress. She is also wise, agile, smart, loving, and compassionate.

As Chieftain after she sneaked away from the Great Jedi Purge to Felucia, she wears a cream backless top with a deep V-front (that shows her both bare back and shoulders) and brown straps around her midriff that seem to accentuate her breasts and bellybutton. She has a light brown loincloth (which only covers her groin) and homemade bikini bottom. She also sports a bit of gray cloth wrapped around her feet (that shows both her bare toes and heels) and most of it around both leg calves (that shows her right knee) and left forearm (with a couple silver spikes on it). She's tied j brown straps around her lekku and montrals are long enough that they almost reach the ground behind her. She carries white stripes of war paint marked on both her bare arms and thighs and silver toenails when goes half barefoot. She also dons a white tooth necklace, silver chains around her waist, 3 gold thin bracelets on her right wrist, and silver armband on her upper right arm.