The Force Unleashed Wiki
Register
Don't have an account?
Sign In
Advertisement
in: Imperial Troopers, Galactic Empire, Males,
and 3 more 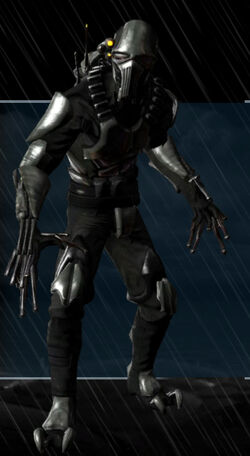 Terror Troopers were an elite class of Imperial soldiers cloned on the planet Kamino. Terror Troopers were first deployed when a renegade clone of Galen Marek escaped from the Timira City cloning facilities in a TIE Advanced. Darth Vader had many of these elite soldiers board the Nebulon - B escort frigate, 'Salvation' with the bounty hunter Boba Fett.

Terror Troopers were part of the Imperial Terror Solders, an advanced and specialized unit within the Imperial military. Terror Troopers were given a unique cloaking device, specialized armor, a stun blaster, and unique combat training. They were very resistant to lightsaber attacks, Force-based attacks, and mind tricks. Because of their training, they were often sent into hostile environments to dispose of their targets, such as enemy starships.

Terror Troopers sent into the 'Salvation' were ordered to escort Fett to the bridge (so Fett could capture Juno Eclipse), kill most the ship's patrols, and distract Starkiller long enough for Fett to reach the 'Salvation's' hangar and escape with Eclipse, then head back to Kamino.

After the Battle of Kamino, and the destruction of Timira City, the cloning of Terror Troopers was halted.